In the Sparse Real-time Instance Segmentation post, you saw how to perform real-time segmentation on a laptop using YOLACT (You Only Look At CoefficienTs). You learned that image segmentation is applied in areas such as detecting a fruit, picking it up, and placing it in a bin. Image segmentation models can also:

In this guide, you will learn about the inner workings of YOLACT, plus other image segmentation models. In addition to providing a history of these models, the guide describes implementation challenges and fast and efficient deployment options.

The computer vision space moves at a terrific speed. A model could be released today, and an advanced version of the same model could ship tomorrow. Because these advances tend to build on previous research, let’s look at the earliest segmentation models in 2015 and make our way to the most recent ones:

The encoder layers are responsible for feature extraction and downsampling, while the decoder up-samples the image and generates a pixel-wise label map. Since the FCN encoders are for feature extraction, you can use existing object detection models such as VGG networks. FCN adapts classification networks such as VGG networks into fully convolutional networks and transfers their learned weights by fine-tuning them to the segmentation task.

A fully convolutional network is achieved by removing the final classification layer and converting all fully connected layers to convolutions. A 1-by-1 convolution is used to predict scores for each class. A deconvolution layer is then used for upsampling the outputs to dense outputs.

Several key features of the FCN architecture are that it:

The name, U-Net, is inspired by the shape of the architecture. The decoder and encoder layers in U-Net are symmetric, meaning they have the same number of layers arranged similarly. The number of up-sampling and down-sampling steps are equal.

U-Net is a modification of FCN to work with a few training images and generate accurate segmentations. The architecture of U-Net consists of:

At each step in the expansive path:

U-Net is made up of 23 convolution layers. The network is trained using input images and their segmentation maps. The final layer in the network is a 1-by-1 convolution that maps each 64-component feature vector into the required number of classes.

SegNet is an image segmentation model similar to FCN. SegNet is convolutional. Hence it uses no fully connected layers. SegNet was built for memory efficiency and less computational time at inference. It was motivated by scene-understanding applications. Unlike FCN, SegNet has trainable decoder filters.

SegNet, like U-Net, is symmetric. The first layers in the encoder are two convolution layers followed by a pooling layer. The two last layers in the decoder consist of an upsampling layer followed by two convolution layers. The architecture of the encoder is similar to the VGG-16 network with the fully connected layers discarded. Hence the SegNet encoder network has 13 convolutional layers. Training the SegNet model, therefore, can be done using the VGG weights trained for object classification.

Reusing the max-pooling indices in the decoding process leads to:

The decoder is followed by a multi-class soft-max classifier for pixel-wise classification. The classifier produces class probabilities for each pixel independently.

Mask R-CNN is an extension of Faster R-CNN for instance segmentation by adding a branch to predict a segmentation mask for each region of interest (RoI). Segmentation masks are predicted pixel-to-pixel by an FCN—the mask branch. However, the addition of a mask branch adds computational overhead.

As an extension of Faster R-CNN, Mask R-CNN has three branches:

In Mask R-CNN, a binary mask for each RoI is generated in parallel to the prediction of the class and bounding box offset.

YOLACT is a one-stage instance segmentation model like YOLO and SSD for object detection. This means that, unlike Mask R-CNN, YOLACT doesn’t start by creating Regions of Interest (RoI) and then segmenting them. Re-pooling features for each ROI in two-stage networks makes them slower. Hence, one-stage detectors such as YOLACT are faster.

YOLACT works in two parallel steps that make it fast:

YOLACT produces instance masks by linearly combining the prototypes with the mask coefficients.

YOLACT is similar to Mask R-CNN in that it uses an existing one-stage object detector and adds a mask branch. The YOLACT architecture comprises the following components:

PointRend (Point-based Rendering) performs point-based segmentation predictions. The network can be used for both instance and semantic segmentation tasks. PointRend can be applied as a mask head in Mask R-CNN and other segmentation methods.

PointRend receives one or more CNN feature maps from regular grids and outputs high-resolution predictions over a finer grid. As shown below, PointRend performs better on boundaries than other methods, such as Mask R-CNN.

PointRend works in the following way:

PointRend is less computationally expensive because it uses a sample of the points in the image. It can also generate higher-quality masks compared to Mask R-CNN.

YOLOv5 is an object detection model in the You Only Look Once (YOLO) family by Ultralytics. YOLOv5 translated the model from Darknet to PyTorch. YOLOv5 uses data augmentation strategies, such as mosaic augmentation, that help in accurately detecting small objects. Porting the model to PyTorch also enabled training and inference in lower precision, speeding up inference and training.

YOLACT++ also introduces a new Fast Mask Rescoring Network that leads to better performance by re-ranking the mask predictions according to their mask quality. Rescoring the predicted masks is done based on their IoU with ground truth.

The Fast Mask Rescoring Network comprises a 6-layer FCN with ReLU per convolution layer and a global pooling layer. The network accepts YOLACT's cropped mask prediction and generates the mask IoU for each class object. Rescoring is done by calculating the product of the predicted mask IoU and the classification confidence.

Sparse Instance Activation for Real-time Instance Segmentation (SparseInst) is a fully convolutional network that uses sparse instance activation maps (IAMs) to identify informative regions of objects for recognition. Unlike other networks, such as YOLACT, it doesn’t apply non-maximum suppression (NMS).

The architecture of SparseInst is made up of:

YOLOv8 is the latest edition in the YOLO family by Ultralytics and is an upgrade to YOLOv5. Support for image segmentation as well as object detection and image classification continues. New capabilities have been released to improve performance, versatility, packaging, and the overall developer experience. For example, while the previous version depended on scripts for installation, the latest version can be installed via a PIP package (and from source). The YOLOv8 repository has the comprehensive documentation to get you started. And great news, DeepSparse and YOLOv8 deployment is a winning combination! You will see that YOLOv8 is an excellent alternative because of its ability to scale.

Applying the models mentioned above in practice is still challenging despite these image segmentation advances. Particularly, these models:

Let’s look at these challenges in more detail.

Computer vision models are usually large and give decent results in real-world applications. However, the model size makes it challenging to deploy the models. For example, you can’t deploy a model that is several gigabytes on mobile—it will take longer to download the model on the device, and mobile devices have little storage. You could decide to deploy the model via an API endpoint at the expense of lower latency.

Model sparsification can be achieved using SparseML, which decreases the model size without affecting its accuracy. Reducing the model's size also speeds up inference, which is crucial for implementing real-time image segmentation and deployment on the edge. Fortunately, you don’t need to sparsify these models. You can pick an already sparsified model from SparseZoo.

Large computer vision models usually require expensive GPU hardware to train and deploy. GPUs are fast and powerful but also are specialized, have short lifespans, and consume a lot of electricity. CPUs are cheap and readily available. What if you could achieve GPU-class performance on commodity CPUs? Enter DeepSparse.

DeepSparse enables fast inference of models on CPUs by utilizing the CPUs' fast and large caches. It uses sparsity to reduce the need for flops, leading to low latency and high throughput. Furthermore, DeepSparse is environment agnostic, enabling deployment on-premise, in the cloud, or at the edge. DeepSparse also enables you to reduce compute costs by deploying to CPUs instead of GPUs.

For example, you can deploy the YOLACT Pruned Quant model  from SparseZoo. This model has 82.8% of its weights removed, after which it has been quantized. The model size is 9.7MB compared to 170MB for the original. The model has a 28.2 mAP compared to 28.8 for the original model; hence sparsifying and quantizing the model does not affect its performance.

You can use the DeepSparse annotate command to save an annotated photo on disk. 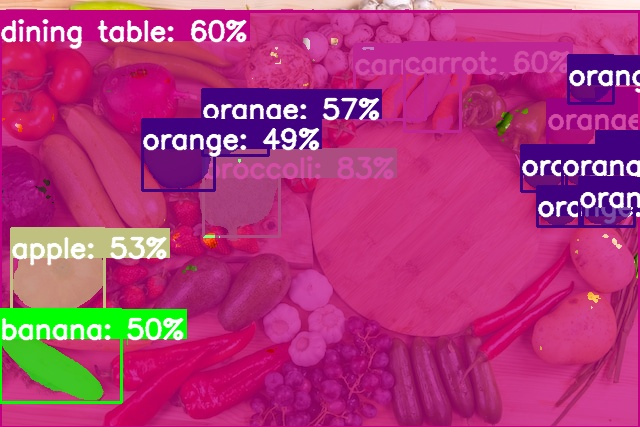 Photo by engin akyurt on Unsplash

There are numerous image segmentation models from which to choose. The choice will depend on your use case. That notwithstanding, you will always want a model that is easy to deploy and faster at inference. For instance, you will need a model that can make inferences in real time for applications such as people counting and autonomous cars.

For real-time applications, you will also be concerned with FPS and the compute required to run inference. This article showed that you can deploy image segmentation models for rmeal-time inference on CPUs using DeepSparse while achieving GPU-class performance.

Give it a shot now, and let us know how it goes. Create a PR or send us a message in our community Slack if you need any help along the way. We can’t wait to see all the cool applications you deploy using DeepSparse.